There’s only three build­ings on campus, I think, where I’ve used every single (men’s) bath­room that I know of. Kane was completed very early on, and Gerberd­ing followed shortly after­ward, but mostly because students and faculty aren’t allowed above the first floor. Gowen was success­fully surveyed last month to round out the list. Parring­ton is next on my list. Why Parring­ton, you may ask? Part of it is its prime loca­tion on the Memo­r­ial Drive round­about where foot traf­fic and auto­mo­bile traf­fic abound. Part of it is that I walk past it several times a week, and it happens to be about the midway point of my walks from wher­ever I’m going to and wher­ever I’m coming from. It’s my last check­point where I can use the bath­room before I do so upon arrival at my desti­na­tion, however far into the future that may be, so I frequent Parring­ton as a precau­tion, and based on the ever-p­re­sent foot traf­fic, I’d assume the same for other people, too. Basi­cally it’s a convenience thing.

Parring­ton is home to the Evans School of Public Affairs, which, after all my time on campus, I still don’t know what that consti­tutes. But I guess it’s pretty compet­i­tive because not that many people are in there at any given time for what­ever reason. In gener­al, this is a good indi­ca­tor of low-fre­quency bath­room use. So all you shy folks, start think­ing for your­selves and observe which build­ings are crowded or not and deduce poten­tial bath­room scenar­ios from your find­ings. Be cognizant of your envi­ron­ment and all that. Perform some deduc­tive reason­ing or what­ever.

The second floor bath­room has been reviewed already so I won’t extrap­o­late on that. If you’re in a hurry you can just skip up one flight of stairs and call it a day. If you can muster up the patience and deter­mi­na­tion to hike up that next flight, your sacri­fices could be paid off and then some. Shy and awkward read­ers alike will be happy to know that Parring­ton 3 is a one-man room with the vacan­t-oc­cu­pied dead­bolt on the front. No unnec­es­sary inter­ac­tions. Just stream­lined effi­ciency and privacy. 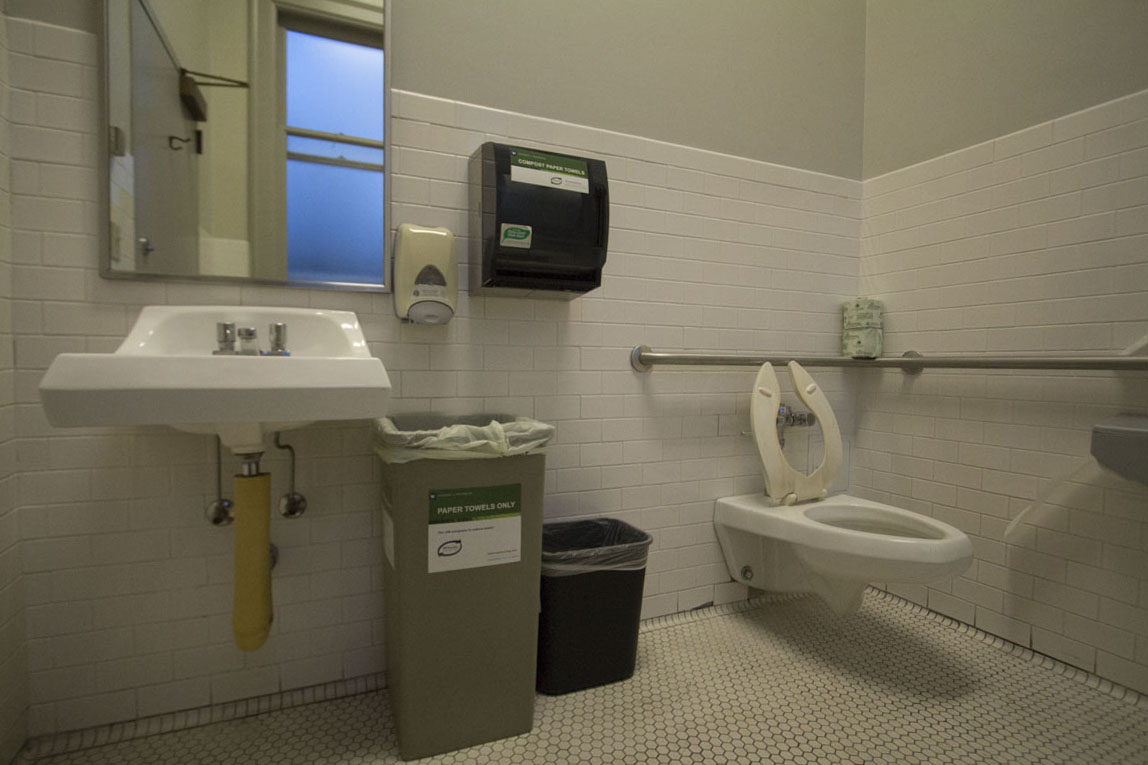 In a perfect world, all bath­rooms would be like this, but that’s simply inef­fec­tive build­ing design and can’t accom­mo­date nearly as many people. Besides, if a bath­room like that gets used heav­ily on a daily basis, it’s going to be gross before your 10:30 class. So it’s good that these sorts of one-man bath­room asylums are few and far in between. They should be diamonds in the rough. You should be able to pretend that they’re clos­ets you walk through to get to Narnia or Neverland and they’re your own little secret hide­away sanc­tu­ary. When you dilute things like that for the mass­es, every­one gets to expe­ri­ence their own magi­cal happy place but now the expe­ri­ence is watered down and smellier. In a sense it’s para­dox­i­cal that this blog exists because I’m letting all y’alls know about the best spots only to let more people in the know about them and making these spots less exclu­sive and cool and private. But this isn’t a philo­soph­i­cal type of site so I try to ignore all those contra­dic­tions. I just do me.

The nice part about Parring­ton 3 is that it has a decent amount of natural sunlight. It’s tucked into an insid­e-fac­ing corner facing north­east which means it’s always in the shade but that means that you get enough sunlight and nobody can see you (the windows are marbled and blurred anyway). It’s just a nicer, calmer atmosphere than being in a place with no windows, which is why I like this bath­room so much. Yeah, it’s small, but if you subtract your shower from the bath­room at your house it’s prob­a­bly just as big, if not bigger, and it’s only intended for one person, so just keep things in perspec­tive. This one is prob­a­bly one of my favorite joints to go poop on campus now. Get to it quick before word gets out.